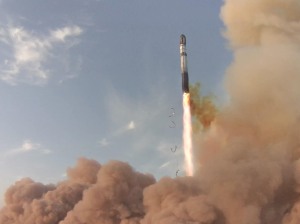 South Korea’s new multipurpose satellite made contact with a ground station in the Asian country early Friday, confirming its successful deployment into its target orbit, officials in Yasny said. The first communication contact was made at 2:35 a.m. (5:35 a.m. KST), according to the officials from the Korea Aerospace Research Institute (KARI).

The Korea Multipurpose Satellite-5 (KOMPSAT-5) was launched Thursday from a launch base in Yasny, located some 1,800 kilometers southeast of Moscow, using Russia’s Dnepr rocket, a space launch vehicle converted from a Soviet-era intercontinental ballistic missile.

Beacon signals from the satellite were initially picked up by the Troll Satellite Station in Antarctica, 32 minutes following the launch, partly indicating the satellite’s successful deployment into its orbit.

South Korea will launch its first radar-equipped Earth observation satellite capable of providing images in any type of weather condition, in an important step in developing its commercial space program. The Ministry of Science, ICT and Future Planning announced Thursday that the satellite KOMPSAT-5 is scheduled for lift off on Aug. 22 from a Yasny launch base in Russia.

The KOMPSAT-5 will operate at an altitude of 550 km in a dawn-dusk orbit, a type of orbit set up so that the area of Earth directly below the satellite is always just in daylight ― either at dusk or dawn. It will conduct all-weather and all-day observations of the Earth during its five-year mission.

South Korea faces a bumpy road ahead to be a space power despite the successful launch of a locally assembled rocket that gave legitimate reasons for the parties involved to celebrate. No longer feeling the pressure of the two previous failures, government officials are speaking of bringing forward the launch of the planned Korea Space Launch Vehicle-2 (KSLV-2), a bigger and more powerful successor to KSLV-1, also known as Naro.

The “self-developed” KSLV-2 is tentatively scheduled for 2021 but the state-run Korea Aerospace Research Institute (KARI) is promoting a date three years sooner. President-elect Park Geun-hye has expressed support for the advanced date, praising the success of Naro as evidence of a positive outlook. But concerns are rising due to an unanswered fundamental question: Does Korea really have what it takes to do this?

South Korea will again seek to join the elite global space club next week with a third launch of its Korea Space Launch Vehicle-1 (KSLV-1), the science ministry said yesterday.

The space rocket, also known as Naro, will be launched Wednesday from the country’s Naro Space Center, 480 kilometers (299 miles) south of Seoul, the Ministry of Education, Science and Technology said in a released statement. The decision came at a meeting of the Launch Preparation Committee.

“After reviewing launch preparations and weather forecasts, the committee has confirmed the third launch of the Naro will be possible on Jan. 30 as of now,” the ministry said.

The launch committee earlier set Jan. 30-Feb. 8 as candidate dates for the scheduled launch. It will be South Korea’s third attempt to send the KSLV-1 into space after its two attempts in 2009 and 2010 ended in failures.

Korea plans to launch the Korea Space Launch Vehicle-1 (KSLV-1) next week in its third attempt to send a rocket into space from its own soil, a government committee said Thursday. “Nov. 29 has been set as the candidate launch date,” the Naro Launch Preparation Committee said in a released statement. “The possible time of the launch will be between 4 and 6:55 p.m. with the actual time to be decided on the launch date.”

It said, however, that both the date and time were still tentative as bad weather conditions and many other issues could further delay the planned launch.

Seoul originally sought to launch the KSLV-1, also known as Naro-1, on Oct. 26 but a broken rubber seal in a connector or adapter between the rocket and its launch pad forced it to reschedule its third attempt to put a rocket into space. The first two attempts, in August 2009 and June 2010, both ended in failure.

The chief of Korea’s aerospace agency expressed optimism ahead of the launch of the nation’s first space vehicle slated for October. “Everything is under control and I’m sure we’ll have a successful launch in October,” Kim Seung-jo, president of Korea Aerospace Research Institute, said in an interview with The Korea Herald.

Korea failed in its previous two attempts to launch its own rocket in 2009 and 2010. KARI has learned crucial lessons from the experiences. The KSLV-1, known as Naro-1, is a two-stage rocket built in cooperation with Russia. Russia’s Khrunichev Space Research designed and manufactured the lower part and KARI developed the upper part.

Korea made progress in its commercial space program by launching its third Earth observation satellite from a Japanese space center on Friday.

The KOMPSAT-3, also called the Arirang-3, lifted off aboard the Japanese H-2A rocket at 1:39 a.m. from the Tanegashima Space Center on an island some 115 kilometers south of Kyushu.

The satellite was separated from the rocket and went into orbit 16 minutes after launch and sent its first signal to a ground station in Antarctica at 2:18 a.m. The satellite exchanged signals with the Korea Aerospace Research Institute in Daejeon around 3 a.m., indicating that it has entered the correct trajectory.

The School of Space Research at Kyung Hee University is collaborating with the Space Sciences Laboratory at the University of California, Berkeley, and the Space and Atmospheric Physics Group at Imperial College London to make a set of miniaturized satellites to study the weather in space.

The collaboration began under the TRIO-CINEMA project last year when the U.S. National Aeronautics and Space Administration (NASA) asked the Korea Aerospace Research Institute (KARI) to join the project. A deal specifying the expected roles and financial contributions of all parties was signed in November.

“This project to explore outer space using compact satellites is the first of its kind and is the first exploration mission by Korea,” said an astronomy and space science professor at Kyung Hee University.

South Korea will launch a multipurpose satellite equipped with a high-resolution camera that can provide detailed meteorological observations of the earth from a Japanese space center next week, the government said Tuesday.

The Arirang 3 satellite is scheduled to lift off at 1:39 a.m. on May 18 from the launch pad at the Tanegashima Space Center located south of Kyushu Island, the Ministry of Science and Technology said.

The satellite has an electro-optical camera with a resolution of around 70 centimeters that can give Seoul the ability to take precise pictures of weather front developments and the planet’s surface. The satellite is expected to stay operational for four years and can also be used to enhance national security, cope with natural disasters, better manage resources and monitor the environment.

The 980-kilogram satellite will be placed in a low orbit 685 kilometers from earth’s surface by Japan’s H-IIA rocket.