Hyundai & Kia will greatly increase its R&D investments starting this year. The company is forecast to become No. 3 in the automotive industry in terms of annual R&D investments. In particular, it is expected to lead the next-generation automotive technology development along with Volkswagen and Toyota. Although it is No. 5 in global sales, it has remained in the lower ranks in terms of R&D investments. Now Hyundai & Kia has laid the foundation for ‘completely changing’ its technological competitiveness. According to industry insiders on January 19, Hyundai & Kia’s average yearly R&D investments (KRW6,775 billion) in the next 4 years are No. 3 in the global automotive industry following Volkswagen and Toyota. The company is planning to invest a total of KRW27.1 trillion in R&D from 2015 till 2018.

According to the R&D statistics (EU R&D Scoreboard) recently published by the European Commission (EC), Volkswagen invested the largest amount (about KRW14,720.5 billion) in R&D in the automotive industry (as of 2013), followed by Toyota (KRW7,859.6 billion) and Daimler (KRW6,742.8 billion. Looking at the R&D funds for 2015 only, Hyundai & Kia rapidly rose to the No. 3 position just below Toyota in the industry. The company invested KRW2,219.3 billion in R&D in 2013, ranked No. 15 in the automotive industry including automobiles and parts. However, in just 2 years, its R&D investments increased more than three times, and the company became a top ranker in quantitative terms. As a result, its competition with other auto makers in Germany, Japan and the US over next-generation technologies is forecast to intensify further. 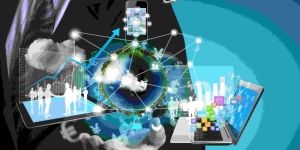 As President Park Geun-hye continues to emphasize innovation as a way to strengthen the country, Korea has been ranked No. 1 overall by the Innovation Union Scoreboard of the European Commission.

According to the ranking released Tuesday,Korea outperformed the United States, Japan, European Union and Canada. The 28 European Union members and 10 other countries – including Korea, Japan, China, Russia and India – were also ranked. The innovation index was based on the average of 25 indicators rated between 0 and 1. However, nonmembers of the union were evaluated only on 12 indicators due to availability of data. Korea scored 0.74, slightly ahead of the United States (0.736) and Japan (0.711). The European Union’s average was 0.63.

Using 100 as a baseline to represent the European Union’s average score, Korea trailed the EU until 2008, but has seen steady improvement since. The country scored 117 last year to tie with the United States. The index was largely based on indicators in three areas: talents, investments and R&D projects; corporate activities in R&D and patents; and results of R&D, including commercialization and revenues. 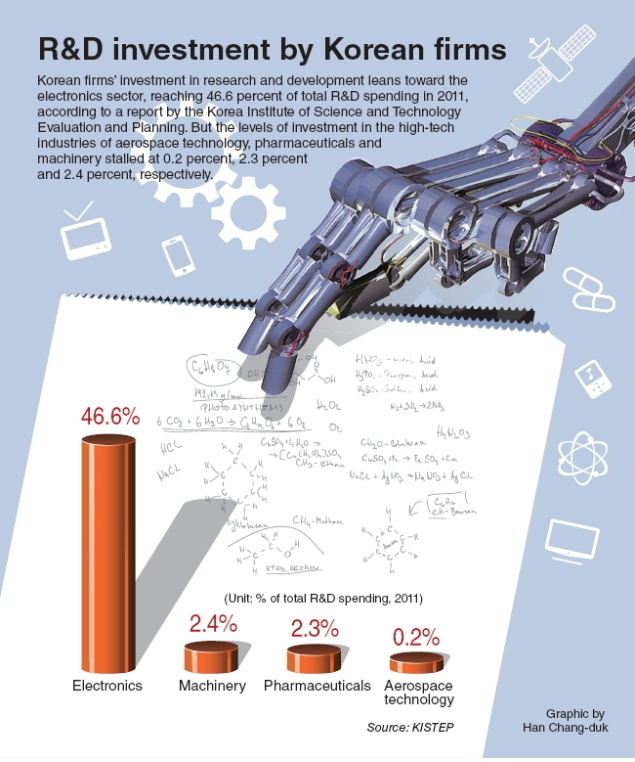 Korean firms’ investment in research and development leans toward the electronics sector, reaching 46.6 percent of total R&D spending in 2011, according to a report by the Korea Institute of Science and Technology Evaluation and Planning. But the levels of investment in the high-tech industries of aerospace technology, pharmaceuticals and machinery stalled at 0.2 percent, 2.3 percent and 2.4 percent, respectively. 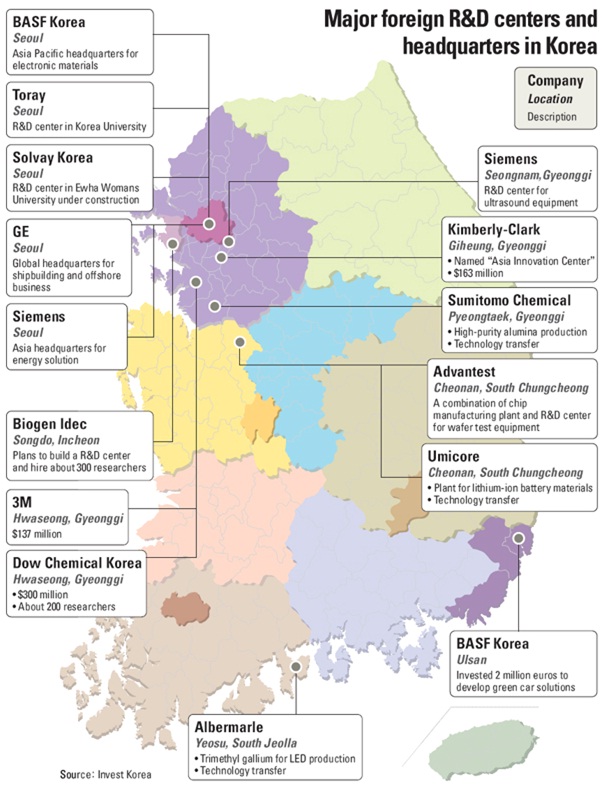 As Korea has become one of the world’s leading high-tech economies, with global titans like Samsung Electronics, the nature of foreign investment in the nation has changed as well.

Over the past six decades, the relationships between Korea and foreign businesses have advanced from rudimentary investment in low-end manufacturing industries to the establishment of high-level research and development centers.

Although the Korean market is relatively small compared to giants like China and Japan, and more regulated than free trade havens like Hong Kong and Singapore, foreign companies see Korea as a more crucial location for product development because of well-educated researchers and cutting-edge IT infrastructure.

In the 1960s and 1970s, the amounts of foreign investment in Korea were relatively small by design and could mostly be found in manufacturing. Under Park Chung Hee, foreign investment was valued mostly for the expertise and technology local companies could gain from it.

South Korea will sharply increase its investment in science and technology setting a 92.4 trillion won ($80 billion) budget to finance research and development projects in new growth sectors by 2017, the government announced on Monday. The plan represents a more-than 30 percent increase from the previous Lee Myung-bak administration’s five-year budget of 68 trillion won.

As part of the five-year science and technology development project, the budget will be allocated to enhancing agricultural and medical technology as well as supporting basic science research. The government said it believed the investment would help elevate the level of science and technology research and help create some 640,000 new jobs.

Over the last decades, Samsung Electronics has been regarded as a “fast-follower” following leaders in technology businesses that the outfit is involved with. As Samsung is still heavily dependent upon quite cyclical and more volatile component businesses, conventional thought was that Samsung isn’t positioned to produce “wow” products that can shake up the market. Mentioning Samsung’s indisputable position ― top suppliers in memory chips and flat-screens ― Samsung was being treated as just a trusted parts supplier guaranteeing on-time delivery, better pricing and output commitment.

Samsung will launch its first technology foundation, which was aimed at supporting “basic technologies” with an investment of 1.5 trillion won by 2020, Samsung said. Meanwhile, it will invest 170 billion won by 2017 from this year as a plan to offer software education to 50,000. From 2013 to that year, Samsung plans to hire a total of 10,000 software workforces, according to the company in a statement. But Samsung officials say those are “small things” as the firm’s partnership with clients is entering a “new phase.”

Meanwhile, the report showed that Samsung applied for a total of 18,139 patents last year that include 11,973 international patents. The company acquired 2,013 patents in South Korea last year and secured 5,081 patents in the U.S.

South Korean companies are likely to increase their investment in research and development (R&D) this year, according to a survey conducted and released by the Ministry of Knowledge and Economy (MKE) and Korea Institute for Advancement of Technology (KIAT) Sunday.

The survey selected the nation’s 1,000 largest investor companies in R&D with stratified sampling method, and 334 companies of them responded. The top 1,000 investors make 82.6 percent of the nation’s total R&D.

The respondents were planning to make R&D investments totaling 10.30 trillion won ($9.45 billion) this year and the average investment per company stood at 30.83 billion won.

SK Group, the country’s third-largest conglomerate, said Monday it would increase its investments to 16.6 trillion won ($15.33 billion) this year, up 10 percent from 15.1 trillion won in 2012, in research and development as well as human resources management. Kim Chang-geun, chairman of SK’s top decision-making body SUPEX Council, also said the firm would also hire about 7,500 new employees, including experienced and high school graduates, in 2013.

The comments were made during his first meeting with reporters as the new chief of the nation’s No.3 conglomerate, who was appointed in December last year. SK is currently undergoing difficulties as its chairman Chey Tae-won is in jail after receiving a four-year sentence for embezzling corporate funds for stock investment.